The Third Tallest Falls East of the Mississippi:

Tumbling down a nearly sheer drop of 729 feet, the waters of Amicalola falls are constantly raging on in a shimmering display of color any time of year. Especially if you visit the falls after heavy rain as I did yesterday, you're truly in for a treat, but just as most things are in life, seeing is believing:

The History of the Falls:

Unfortunately for the history buffs of today, I want to be forthcoming in saying that most of the history of Amicalola Falls is truly unknown. Dawson County, which Amicalola currently resides in was once owned and inhabited by the Cherokee, who officially named the falls, "Um-ma-eolola" or Tumbling Waters when translated from Cherokee. The Cherokee of this area knew about the falls and resided around it in fewer numbers than other areas, given the rugged terrain of the Appalachian Mountains surrounding the falls. From the accounts of European settlers and explorers who interacted with the Cherokee of this area, there is no documented history of Amicalola outside of its name, but outside of pre-European human history, there's still a lot we've found out about Amicalola Falls before it was written about.

The shimmering waters of Amicalola Falls dribble down from their source at Amicalola Lake over a mile from the falls in the Chattahoochee National Forest. Before reaching the incredible drop, the creek that's visible from the top of the falls is nearly twelve feet wide, and only one foot deep. Fed by natural springs, rainfall, and snow, this creek and the falls that follow grow more grand and spectacular with each passing year. Amicalola's natural formation is truly a gift to all Georgian's and earns Amicalola its place as one of the Seven Wonders of Georgia.

​Moving on from Amicalola's geology, and pre-European history, it's time to talk about one of the most prominent figures in Amicalola's history, Mr. William Williamson. Williamson was one of the many Georgia surveyors eager to claim land in the sixth Georgia Land Lottery. After searching for any unclaimed land northeast of Dahlonega in 1832, Williamson discovered the falls by complete accident, and in the first-ever written account of Amicalola, said "In the course of my route in the mountains I discovered a waterfall perhaps the greatest in the world the most majestic scene that I have ever witnessed or heard of the creek passes over the mountain & the fall I think can’t be less than six hundred Yards. The mountain is at least three-fourths of a mile high. I made great exertions to get on the summit but the ascent was so great that I was completely exhausted by the time I reached half way. My position was such that I had a perfect view of the entire fall the stream is called Um-ma-eolola from the Fall (Tumbling Water)”.

​Despite his raving review of the falls, Williamson did not end up claiming the land in the upcoming land lottery. Instead, it was given to an unknown settler, who found the beautiful land far too rugged to live on and left the area undeveloped. Although no settlers developed land in this area, it was soon after the Sixth Georgia Land Lottery that human tragedy struck the falls. In 1838, the United States enacted one of the most inhumane initiatives in our nation's history, the infamous "Trail of Tears. " This initiative forcibly removed all Cherokee Citizens from the State of Georgia, and in the process, killed more than 4,000 people. This horrific initiative is one of the darkest chapters in Georgia and United States history and is sadly a key point in many of Georgia's natural wonders. The people that respected, cared for, and educated others on the wonders around them were not only denied access to the land they owned for thousands of years, they were also treated as criminals for living on the land they rightfully owned.

Following this dark point in Georgia's history, Amicalola Falls started to see some new developments. In 1852, a settler named Bartley Crane built the first mill at Amicalola Falls, which once sat mere feet from the visitor center of the falls today. Mr. Crane's developments were soon followed in 1860 when church members created the Methodist-Episcopal campground at the falls, whose purpose was to revitalize the spirit of Christians who had either lost faith or fervor for the religion.

Moving into the Civil War, this camp was used to house both Union and Confederate troops at different times, but no altercations occurred at the site. Following the Civil War, the area remained largely undeveloped and unorganized aside from the family of Mr. Crane and other settler families in the region. This would change in 1911 when the state of Georgia first purchased part of Amicalola Falls and sought to purchase more from local families. In 1940, the state would get its wish when the family of Mr. Crane decided to sell their land, and in that same year, Amicalola Falls State Park became a reality.

By the 1950s the state had developed many trails and walkways similar to what sits at the park today but was plagued by neighboring farms and businesses intersecting trail points. In 1957 and then again in 1991, the trail system was expanded and optimized to provide more direct, scenic, or adventurous ways to enjoy Amicalola Falls and the subsequent approach to the Appalachian Trail. Following the trail optimization in 1991, the only major work done to the park occurred in 1995, after the devastating Hurricane Opal ravaged the trail system, and destroyed the main bridge overlooking the falls. From then on, the park has been regularly maintained, and beautifully protected to be the site of wonder that it is today.

How to Experience the Falls Today:

Today, the park has many options to see the falls including zip lines, convenient parking spots at the top and bottom of the falls for two-way hiking, and a set of planted binoculars to see the falls from the parking lot.  Below, I'll list a few more photos from the falls, as well as brief descriptions of the most popular routes hikers typically take at Amicalola: 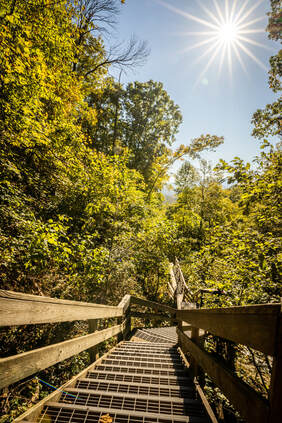 At the upper parking lot of Amicalola Falls, visitors can stand just feet from the sheer drop of the waterfall, with an incredible view of the valley that surrounds the park. Although this view doesn't allow for many views of the falls, it does have access for you to walk down and see the falls from their main observation bridge. 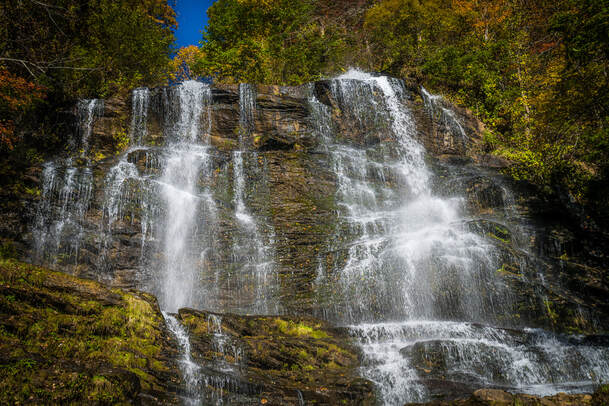 West Ridge Falls is an incredibly important trail at Amicalola, as it provides a full view of the falls to wheelchair-bound or mobility-challenged visitors. The trail, which has its own parking lot is only .3 miles in length and is perfect for less mobile family members. 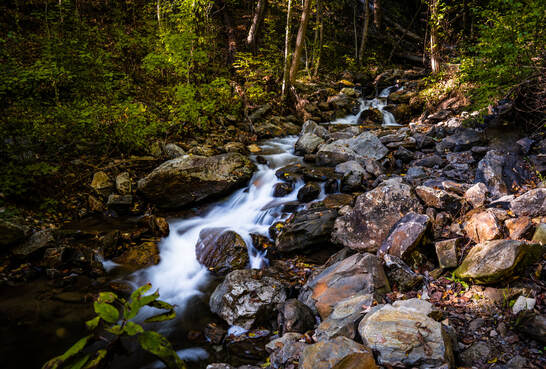 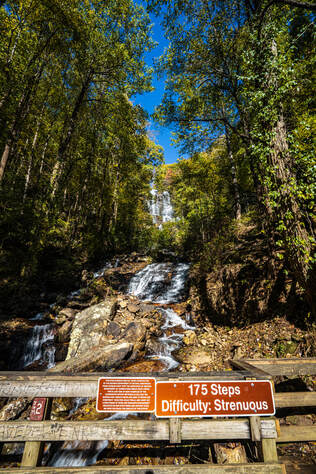 For the more experienced and perhaps more adventurous hiker, there is an 8.5-mile hike to Springer Mountain that begins just feet from the visitor center via a stone archway. This is the unofficial start of the Appalachian Trail in Georgia and could lead you all the way to the trails end in Maine if you were so inclined. Although I personally haven't completed this 8.5-mile section in many years, it's said to provide many beautiful views of the valleys surrounding Amicalola and is worth the extra trip if you have the time.

Being recognized as one of the seven wonders of Georgia, the legacy of Amicalola Falls truly precedes itself and is quite well owned. I would describe the falls as similar in scale and atmosphere to Mingo Falls, in Cherokee North Carolina, with similar cascades and a far larger trail system. Amicalola is beautiful in every season, with many ways to appreciate the park's forests, falls, and overall serenity. This is absolutely one of my top recommendations of sites to visit in the state of Georgia, and I hope you can make it to the falls soon!
Sources:
History: https://www.amicalolazipline.com/about/
Geology: https://www.amicalolafallslodge.com/blog/all-about-amicalola-falls/
Additional Info: https://www.geocaching.com/geocache/GC51124_amicalola-falls-earthcache?guid=f551f8ad-6ae4-4aba-819e-35c8f287e90d
Trail Info: https://www.world-of-waterfalls.com/waterfalls/eastern-us-amicalola-falls/