David and I began our second day in the Florida Keys excited, but also with a healthy dose of realism. Our clear bottom kayak tour had been canceled on us due to unforeseen high winds and potential rain, causing us to scramble for options (although it does not seem to be very hard to find kayak rentals in interesting places here so scrambling is hardly the right word). We found John Pennekamp State Park after a brisk Google search and decided without much inspection past the fact that they had kayaks that this would be where we were headed that morning. After a quick ride just three minutes from our campground, we found ourselves coasting down a road engulfed in rich vegetation atop a sandy floor that led to an entry gate, and shortly thereafter into the John Pennekamp State Park. The parking lot put any state park car lot I had ever been in to shame, with a beautiful and wide-open view of the ocean that terminated in a rocky beach with trees embellishing all sides. We walked into the park office, rented 2 single-person kayaks for an hour, and then we were off into the mangrove-lined waterways to see all they had to offer. The trail system at John Pennekamp State Park is extensive, and simultaneously relatively easy to follow, especially with the laminated map I was toting around with me in the kayak. 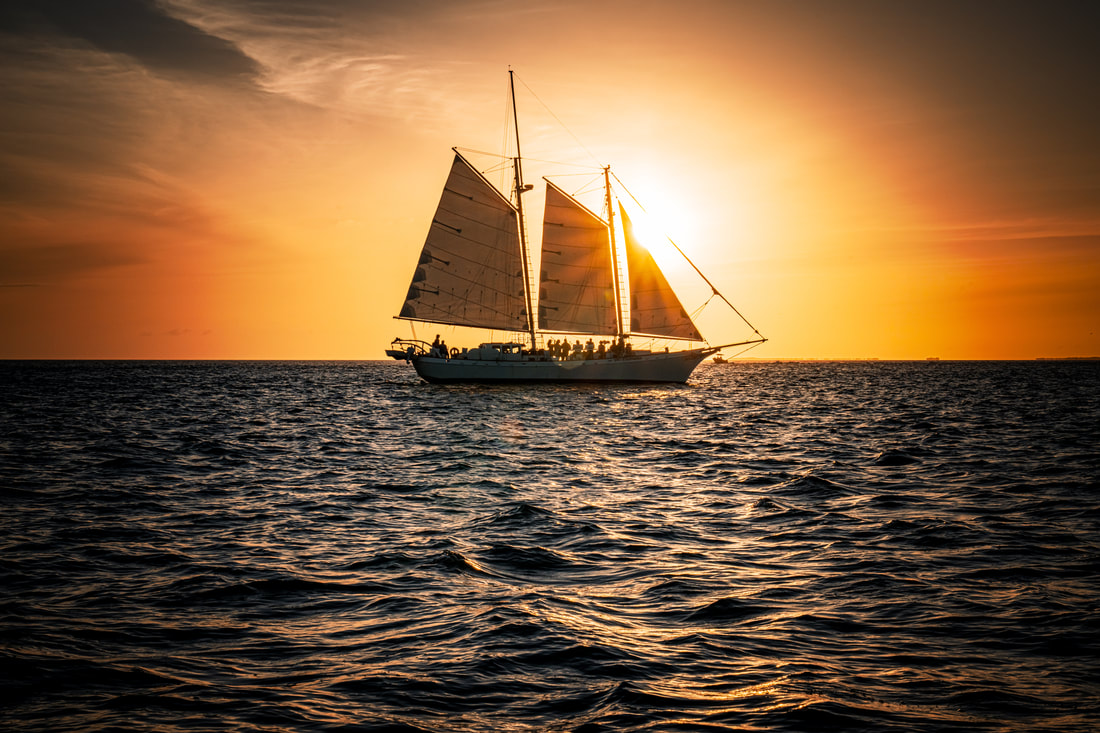 David and I began to paddle our way into the loop we were instructed to take, and briefly after leaving the marina were greeted by dense, vivid thickets of mangroves. These trees were so thick and uniform it almost seemed like we were getting swallowed by the root systems and leaves the further we floated down the trail. What struck me most was the labyrinth of grayish-brown roots weaving around each other in all directions to form a stable basis for all the mangroves to grow in an aquatic environment. As we got closer to our turnaround point in the loop, the trees began to encroach more and more, and the vivid greens began to reflect on the water all around us. I even made a comment to David about how such obscure and bright colors such as the highlighter orange of the kayak paddles, and the neon green of the kayaks seemed to blend into the environment amazingly well to the point it looked as if they belonged there in the first place. 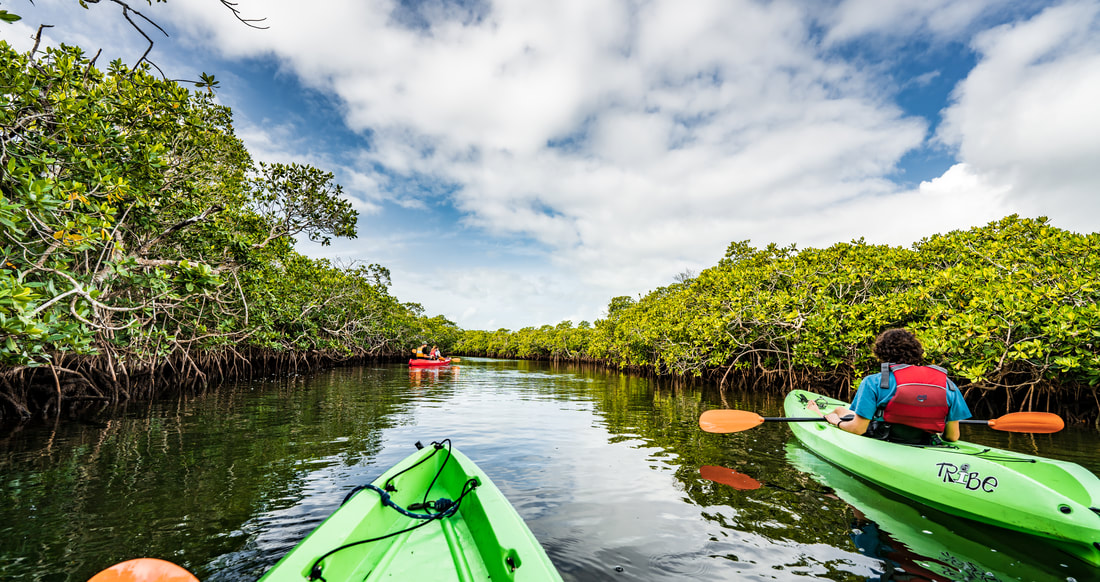 This trail ultimately spat us out into a much wider waterway, that led out to the ocean and to other trails. As we began kayaking towards the return loop, it began to drizzle. A drizzle turned into a rain, and a rain into a pour. Most people, understandably, seemed to be disappointed by this. I was ecstatic. The cool rain hitting the water around us created an environment simultaneously so calm and so chaotic. We began to paddle faster, which only added to the excitement as the greens and blues dimmed into more serious shades. This little rainstorm only lasted a few minutes- if that- but it honestly made the experience for me. Returning to the marina, we were able to take a little more time to appreciate the rich ecosystems that the mangrove trees create, and I even took advantage of a narrow offshoot to test my kayaking skills. The vegetation in The Keys is so unique and necessary for healthy aquatic biomes, and it was amazing to see such vegetation up close and on the water. 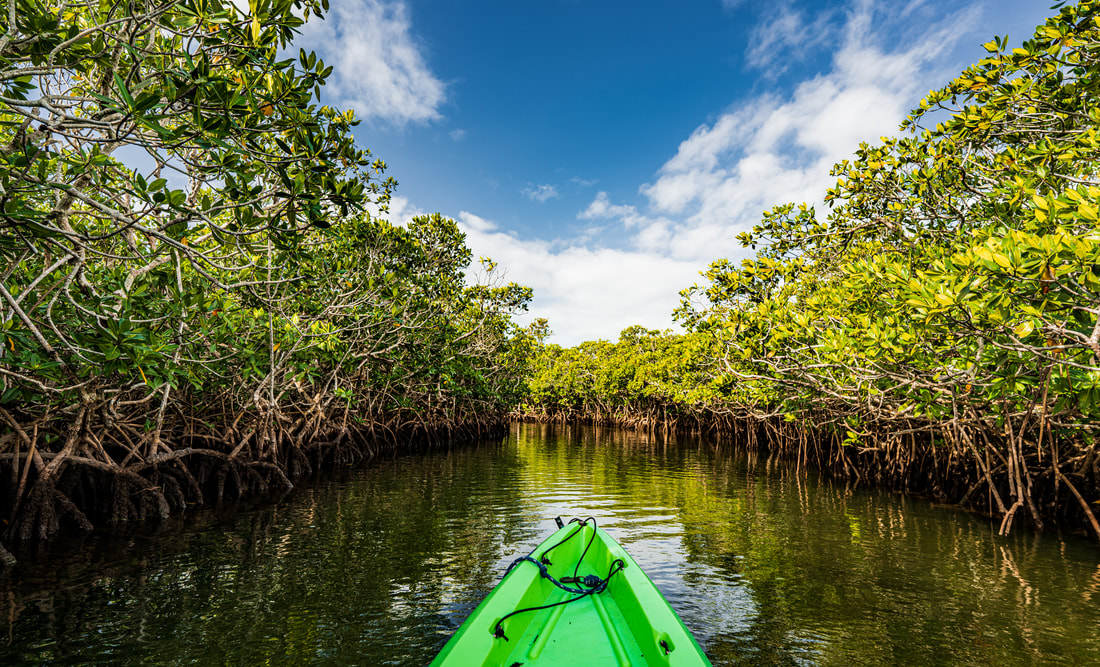 Right before we got back to the launching area, we decided to take a quick break and check out a beach on the opposite side of the marina. It was a little slice of equal part rock and sand that made for a perfect rest stop as we looked for an excuse to hold onto the kayaks a bit longer. After taking a few pictures and resting on some rocks, we got back to paddling and turned up on shore at the launch point. Even though it was short, this was my favorite experience of this entire trip so far. I loved being able to move around the mangroves in tight, thriving trails that were so bright and vivid that they seemed almost slightly fake. Kayaking through the trail system at John Pennekamp State Park is an experience I will continue to look back on, and for only forty dollars, I hope it's a part of your visit to the keys too.