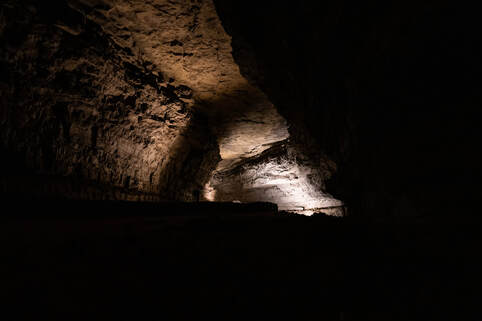 ​Mammoth Cave National Park made its first debut on an official deed when it was sold to one Valentine Simmons in the late 1700’s. Although this is the first written note of the site in government documents, the site’s non-written history dates back much further than that, with pre-historic Native American artifacts from the site being identified as left behind between 2000 and 5000 years ago. With their tribe’s, use of the caves vast resources and passage ways unknown, all we know of pre-historic mammoth cave is that this place was used by Native Americans for burial, a meeting place for generations, and a supply of Gypsum for unknown use. Unfortunately today, that is all we know of the site’s pre-historic use. There are no indications as to why the site’s visitors suddenly stopped 2000 years ago, nor what they did in the cave's surrounding area.

For that reason, there is a lapse in human history at Mammoth Cave from around 0 B.C. until the 1700’s. Shortly after the site was sold by its first written owner in the late 1700’s, it changed many hands in the following years with little activity done at the site. This lack-luster ownership continued until the war of 1812, when the cave was used to dig for Saltpeter, an extremely important resource in the production of gunpowder at the time, and absolutely vital for the American war effort. This era of ownership brought the most exploration, modification, and remnants you see at the site today. Believe it or not, all wooden boxes, hollowed out logs, and vats are from these initial digging operations around the early 1800’s-1810’s. All of the equipment left behind was used to circulate water into and out of the cave in order to pan the mineral-rich dirt, and extract Saltpeter. Due to the caves lack of rainfall, and excellent conditions for natural preservation, everything you see today is as almost exactly as it was used some two hundred years ago. Keeping that in mind when seeing these artifacts just feet away from you today is mind-boggling, and a true hidden gift of the cave's naturally occurring properties.

Shortly after these artifacts were abandoned in the year 1816, Mammoth Cave would see its next era of ownership, with little care for the large amounts of Saltpeter still present in the cave. The new owner's had a far different vision for the cave, being far more interested in tourism and showing people all the hidden wonders right below the surface, just like it is today right? In a short answer, not even close. The owners of Mammoth Cave during this period decided that their focus would be on displaying the corpses of Pre-Historic Native Americans once found in many areas of the cave all the way up until the 1940's. They would invite visitor's to see the, "Mammoth Cave Mummies",  as a sort of sick and twisted novelty all too commonly practiced until the 1940's and beyond in many parts of the United States. To add onto the morbid scene I've already described, these tours were given by four young men, who were teenaged, enslaved Americans who worked in this site until they gained their freedom following the Civil War.

Thankfully for us though, public interest and profit shifted towards the wonders of the cave's natural beauty and rich history, focusing less on the the exploitation of native corpses. These naturally preserved mummies became more of a side-show along each tour, and newer appeals ranging anywhere from experimental cave air treatment for Tuberculosis (which was very unsuccessful), to 1812 history, and 5-15 hour spelunking picnics took the front seat at Mammoth Cave.  Tours continued in many different forms throughout the past two hundred years of the sites operation, with most of them being long tours led by lantern and candle light. Over the years, visitors of Mammoth Cave have been able to see it by boat in the 6th level of the cave system where water is still present today, and in far more recent history, through short, hyper-focused tours with luxuries like electronic lights, stainless steel railings, and concrete floors to prevent people from slipping and sliding in most sections.

The final installment of Mammoth Cave history I'll be speaking on in this article, is the site's purchase by the National Parks System on July 1st of 1941, which at the time, was just a 41 mile cave system with mildly interesting artifacts and important history surrounding the war of 1812. That 1941 description of the now known to be largest cave in the world with a surveyed size of 412 miles, and more than 4,000 visitors per day, is quite different from what the cave turned out to be today. When the National Parks Service took over the operation of Mammoth Cave, they removed the distasteful and insensitive portrayal of Native American bodies, increased safety precautions throughout the cave, and began offering informative tours on the site's geological significance, long documented and non-documented history, as well as more focused sight-seeing excursions. Much of the Cave's initiatives from 1941 remain the same today, with a strong emphasis on the park's dynamic history, unique formation, and significance in the country for many different reasons.  The site remains a wonderful place to learn about cave systems, naturally occurring wonder, and to truly feel connected to the history of the world around you. There is an indescribable feeling of grandeur and scale entering through the same natural passage way Native Americans did over 5,000 years ago, and I hope that's a feeling you can experience too when you make your way to Mammoth Cave. Pictured below, are some of my favorite scenes from my tour today, along with short captions on cave landmarks, and info. If you'd like to hear more about Mammoth Cave's history, and learn a little bit more about some of its first enslaved guides, be sure to check in tomorrow to read about the legacy of Mammoth Cave's most famous guide: Matterson Bransford.