The Cherokee Capital of Georgia:

As I'd mentioned previously this week, this article marks the start of a series of articles I've wanted to do on Cherokee landmarks, history, and innovations across various sites in the state of Georgia. Although this is a topic I've wanted to discuss for a while, it also coincides with the start of Native American History month, and is ever important to shed a light on. 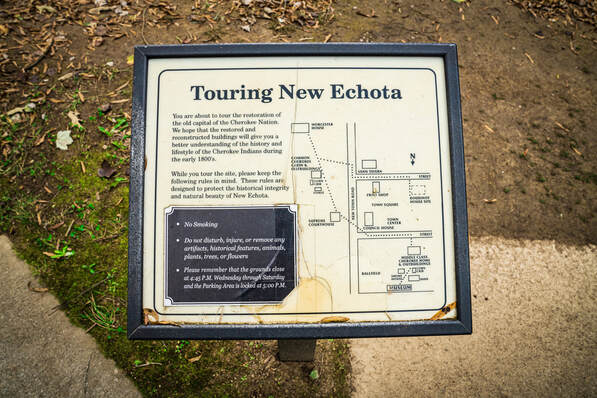 New Echota was the capital of the Cherokee Nation from November 12th, 1825, to September 6th, 1839. Although this site only functioned as the Cherokee Capital for a mere fourteen years, it is undoubtedly a site of incredible progress, achievement, and inevitable tragedy. This peaceful ground just a few miles north of Calhoun is adorned with more plaques and markers than I have personally ever seen at a state historic site, and not one is without merit. New Echota is the site where the first bi-lingual Native American newspaper was printed, the site where the Cherokee Constitution was signed, and the most important site in government for the Cherokee Nation. New Echota is very much  akin to Washington D.C. as it was a city set up for centralized government meetings, another first for the Cherokee at New Echota.

During its peak,  the population of New Echota was only seventy-five people, who occupied the town throughout most of the year, with the average citizen living on an 11-acre lot, and surviving off of corn and vegetable farming. Unlike the Cherokee of other sites, the Cherokee of New Echota were extremely similar to the average American of the time, using the same tools like the plow and cotton gin, paving roads in the same way, and living in very New-England-esque log cabins. They frequently attended church, read and wrote in English as well as Cherokee, and frequently engaged in trade with missionaries and settlers alike. New Echota was one of the most progressive and rapidly developing Native American cities, with an incredibly bright future. Unfortunately for the ever-changing and ever-sacrificing Cherokee though, their work and ambitions would never see fruition. Under the leadership of Andrew Jackson, the publicly scrutinized and unsupported treaty of New Echota, and the egregious state of Georgia, their dreams, land, and livelihoods would be stolen in the name of greed.

Before we fixate on the loss of life, land, and liberty, I want to use this article to shed light on what feats the Cherokee achieved at New Echota under immense pressures all around them and save the tragedy caused by the America that smothered them for a different day.

In total, New Echota was home to around one hundred, hundred-acre lots occupied by families, taverns, missions, and many government buildings. Today, only twelve buildings stand at New Echota, with only one of which being an original structure. The last remaining original structure is the home of Reverend Samuel Worcester, an American Missionary who lived among the Cherokee and served as the official postmaster of the Cherokee Nation. Pictured below is his family home:
Outside of private residences though, there are many important buildings that have been reconstructed on their original lots, as historically accurate as possible. Below, I'm going to list the other structures in pictures, with short descriptions underneath:
Vann's Tavern was a prominent meeting place for many Cherokee after its construction in 1805 by Mr. James Vann. However popular this tavern was, its home was never truly at New Echota. Mr. Vann, a prominent Cherokee business and plantation owner who also ran a successful ferry, often provided travelers with transportation across the Chattahoochee River. This tavern originally existed just next to that ferry, but was carefully dismantled and rebuilt at New Echota in 1957. With such gorgeous wood patterns and clear signs of age, it's one of the most visually stunning buildings in New Echota.
The print shop at New Echota is by far one of the most important structures in the capital. Although still a reconstruction, it was on these grounds with a very similar press to the one pictured above that the first authentic Native American Newspaper, the first bilingual newspaper using Cherokee syllabary, and the legendary Cherokee Phoenix was made. The Cherokee Phoenix was a massive achievement for the Cherokee Nation, allowing them the opportunity to share their truth unfiltered, and uninhibited. The power of the free press remains critically important today, but it's important to remember that in this time period, the free press was not a thing of beauty. The traditional press of the time was full of racism, bigotry, and completely open bias, and across the nation, often spread hateful misinformation and rhetoric against Native American's, often calling them uncivilized, dangerous, and savage. The Cherokee Phoenix was the effort of the Cherokee Nation, and its editor Elias Boudinot's way to rewrite this false narrative. Just as it was in 1828 when the Phoenix was first printed, the Cherokee side of the story is better told by the Cherokee, whose mission statement of the Phoenix went something like this, "We would now commit our feeble efforts to the good will and indulgence of the public, praying that God will attend them with his blessings, and hoping for that happy period, when all the Indian Tribes of America shall arise, Phoenix like, from the ashes, and when the terms "Indian depredation", "warwhoop," "scalping knife" and the like, shall become obsolete, and forever "buried deep under ground".  Elias Boudinot, Cherokee Phoenix, Vol. 1, No. 1.
The Cherokee Courthouse at New Echota was the Cherokee Nation's Supreme Court. During the time that New Echota was their official capital, they actually had a very similar government to the one we do today, with the same three branches, an elected chief, a two-house legislature, and many regional courts. This reconstructed courthouse sits on the same ground as the original courthouse, which heard 246 cases in its time, in addition to educating children, and served as a church when the court was not in session. The first floor of the building, served as the court, with room for the three judges, and benches for the spectators. Although there is a second floor to this building, there is no documented purpose for this room.
The New Echota Council House is a reconstruction of the second official council house of New Echota, which was used from 1822 on, with the National Council meeting on one floor, and the National Committee on the other. These two branches of the legislature were elected by the Cherokee people, and were responsible for agreeing on bills, electing all members of the executive branch, and functioned very closely to our congress of today.
This reconstructed Cherokee farmstead is similar to what the average resident of New Echota would have lived in. It was comprised of four wooden buildings, the one on the back right being a small barn and storage area, the one further up on the right being a place to store corn, the one on the left being a place to smoke and cook meat, and the one most central, the family residence. The residents of New Echota were remarkably advanced and quite similar to their southeastern American counterparts in terms of technology, and lifestyle.

In closing, New Echota was a remarkable city, that sadly never reached its full potential. In just fourteen years, the Cherokee at this site achieved so very much and were only inhibited by the unwelcoming forces surrounding them, and an expansionist American desire. As described by many visitors of New Echota, both in its heyday, and today over a century later, the site is remarkably peaceful and calming to the mind. New Echota today is an excellent resource for visitors to gaze into the past through the buildings and remains of those who lived before and an even better reminder that we as Americans must always strive to be better than our past. Throughout this week, I plan to go further into the human history of the site, the Trail of Tears, and the Cherokee Phoenix. I hope you'll join me in this process and learn more about the Cherokee.