The Creation of the indiana dunes state and national park

How were the dunes established as a park? 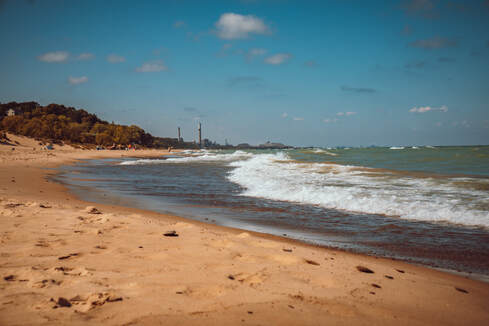 ​Public interest in the creation of a "Sand Dunes Park", actually took place in 1899, seventeen years before the creation of the National Park Service, and the Indiana State Park Service. This public interest was largely bolstered by three individuals, as cited by the National Park Service website being, "Henry Cowles, a botanist from the University of Chicago; Paul H. Douglas, Senator for the State of Illinois; and Dorothy R. Buell, an Ogden Dunes resident, and English teacher." The most prominent written piece of their activism was titled, "Ecological Relations of the Vegetation on Sand Dunes of Lake Michigan", which was penned by Mr. Henry Cowles, later appearing in the Botanical Gazette of 1899. This written piece earned Mr. Cowles a great deal of attention in his own career, but also brought international attention to the plight of the Dune's delicate and intricate ecosystem. The hope of Mr. Cowles was that by showing off this regionally exclusive ecosystem to the world, there would be enough public interest to get the site protected by the government, and safe from industrial interests. Unfortunately for the dune's though, this original effort was unsuccessful.
Little changed in regards to protecting the dunes until another group of activists, the Prairie Club of Chicago, decided to join with Cowles in the year 1908, after witnessing the largest loss of natural land the dune's had ever seen. Due to special minerals in the sand at the dune's, and the massive amounts of easy to collect sand industrial interests like the Ball Brothers, a glass jar company, and the Pittsburgh Plate Glass Company started to collect sand at the site and transport it railroad car by railroad car. Between 1899 and 1920, these companies had managed to level the largest dune of them all, Hoosier Slide, which at its peak stood over two hundred feet tall. When these industrial activities at the dunes started to happen more frequently, Cowles and the Prairie Club saw the writing on the wall and in 1908, began petitioning to protect specific sections of the dunes. To grow and focus on this initiative, they created the National Dunes Park Association, with their tagline being, "A National Park for the Middle West, and all the Middle West for a National Park".

​​The National Dunes Park Association continued to fight for public support of dunes protection, and would eventually go on to hold public hearings on the matter on October 30th, 1916, just one month after the creation of the National Parks Service. These public hearings took place in Chicago, where a large portion of their support resided, and during one hearing for a "Sand Dunes National Park", more than 42 people spoke in favor of the park's creation, with 400 people in attendance and none in opposition, but just as the dream of a Sand Dunes National Park had finally seemed within reach, another wrench was thrown at the National Dunes Park Association, WWI.

When the United States entered WWI on April 6 of 1917, they had zero interest or funding available to establish another national park. With wide public support of the war, their resources and focus were needed elsewhere, which prompted the National Dunes Park Association to adorn a new slogan, which read, "First Save the Country, Then Save the Dunes!". In yet another disappointing turn of events for the dunes, our nation faced one more twist in fate before they would see the creation of the dunes - The Great Depression.

For many, dreams of a national dunes park began to fade. Their largest dune, Hoosier Slide, was already leveled with industrial interests actively making plans for what was left of the dunes. However, just in the knick of time, a ten-year petition by the State of Indiana had been voted on, and the Indiana Dunes State Park opened its gate to the public in 1926. Although just 3.2 miles in size, the creation of the Indiana Dunes State Park brought hope for future protection at a much larger scale. Considering it took twenty-seven years for this State Park to take shape, the drive for a national park at the dunes still had a considerable amount of work ahead of it.

This work began in 1952, spearheaded by a Ms. Dorothy Buell, who worked in collaboration with the Indiana Dunes Preservation Council to create a Save The Dunes Council. These groups faced yet another threat, posed by a union of politicians and businessmen interested in connecting the Great Lakes and the Atlantic Ocean via the construction of an "Indiana Port". The proponents of this port would no doubt be interested in utilizing unprotected dunes land, so in a stroke of genius, Ms. Buell took the fight for the dunes back to the streets and organized a fundraising drive to privately purchase land surrounding the dunes, starting their purchase initiative by buying 56 acres in Porter County, which today is known as the Cowles Tamarack Bog.

The Save The Dunes Council, as well as several key politicians from Indiana and Illinois, including the famous, "third senator from Indiana", Mr. Paul H. Dougla, eventually succeeded in their efforts under the Kennedy Compromise Program, and on November 5th, 1966, the Indiana Dunes National Lakeshore was established. This substantially larger National Park covered nearly twenty-four square miles and cemented the dunes as a fully protected, national park.

Today, the dunes sit at a slightly smaller 23.54 square miles as updated in 2019, and are enjoyed by nearly 2.3 million people each year. Having spent just one day here myself, I can already say it's the best view of Lake Michigan I have ever seen. The dunes are home to incredible wildlife, beautiful blue, and tan waves, gorgeous shorelines for miles. I can't wait to share the sites I see with you over the rest of this weekend, and I hope you find equal beauty in yours.