To Be a mechanic

As said by an excellent family friend and lifetime welder, Ronnie Wright, "You can't call yourself a welder if you started welding last year. You become a welder when you understand how to do it, and can rely on your own experience to solve problems day in day out. That takes most people at least ten years." Although I'm no welder, and have never picked up a welder in my life, I reflect on this sentiment each time I feel myself progress past another milestone. No matter how far I've come, it's important to me to remember that there's a lifetime of education ahead, in work, in relationships, and life as a whole.

Today, as I have the time and passion to write this, I wanted to share a little bit more about what that journey has meant to me, and what I've learned from being around tried and true mechanics kind enough to help me on my journey.

What Makes a Mechanic?

Through my own observations, I would define a mechanic as someone who is experienced, creative, and thrifty. A person who is able to fall back on their own prior knowledge to tackle problems at hand, using the tools and materials around them as well their own imagination to make things work. When a book lacks sufficient details, or a forum falls short of giving you the answers you need, a mechanic is able to think outside the box, and more often than not, experiment until they have a solution. Today just as much as when I first entered trade school, at times it all seems like wizardry.

How some people can fly through a job that took you an hour of frustration, and explain a solution to you in under thirty seconds, is just equal parts baffling and impressive. Learning a trade like small engine repair can be humbling in this aspect, as it has been especially for me as I never had the exposure my less green-thumb classmates seem to have had growing up. I never helped dad fix the cars, bikes, or other toys in the garage, I just rode on them, and I never learned how to maintain lawnmowers, as I grew up in the suburbs, and drove a riding lawnmower for the first time just last week.

Despite my lack of exposure, my experiences in trade school have been nothing but confidence-inspiring, and incredibly informative. In just four short months, I've learned so much more than I'd ever thought I'd know about the functions of engines, the motorcycle industry, and for lack of better explanation, fraternal kindness, something I've always felt within the motorcycle community, and experience now more than ever. The number of classmates I've had help me fix my own vehicles, and call me over to assist them in fixing theirs has been excellent and has by far been my greatest teacher. This desire to help people is a trait I've seen in nearly every mechanic I've come across and makes me excited to do the same for others when I have the experience under my belt.

By my own standards, I'm no mechanic yet, so I'd like to explain what I have learned, and what brought me through the doors of trade school in the first place. 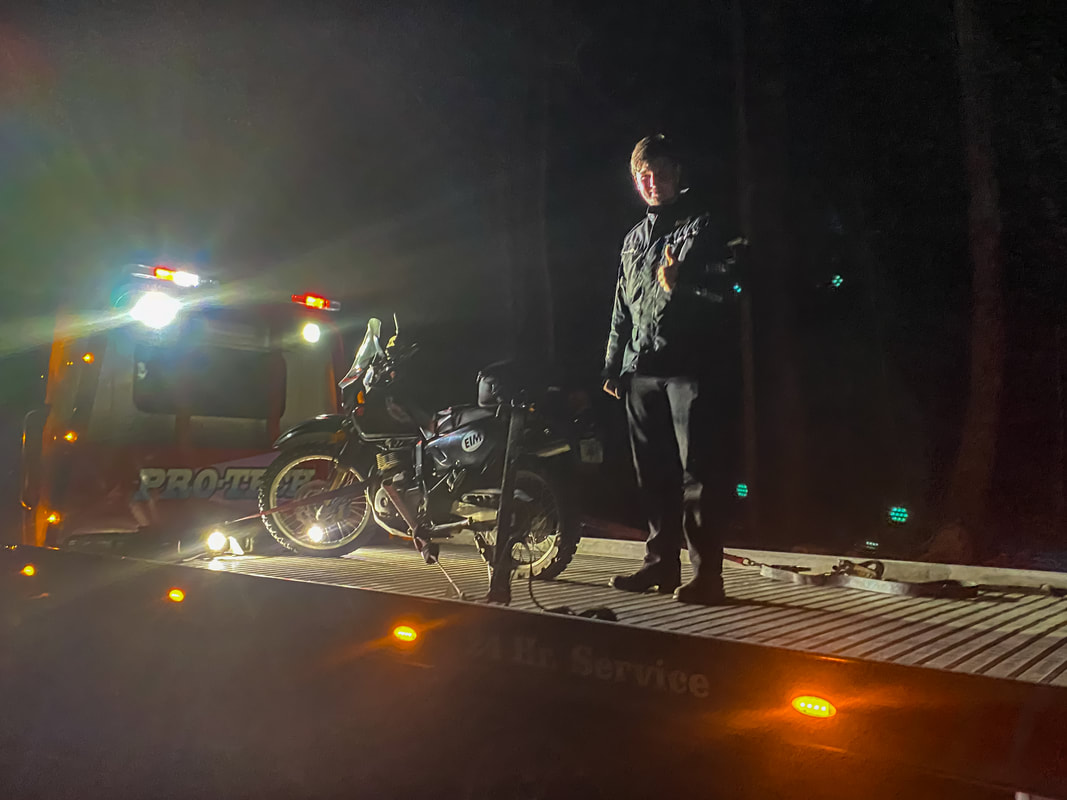 After my first attempt to move back to my home state of Massachusetts was unsuccessful, I made the most of my time left in the promised land, and made daily trips to my grandfather's house for the last week or two I lived there. It was great spending so much time with him, and I enjoyed it until the day before I moved when things took a turn for the worse.

As I was pushing that DR pictured above a little farther than it should have been with tall D606 tires, traveling about eighty down the freeway, my ride suddenly got pretty bumpy. As a Mass native, I simply thought, "huh, roads must really suck here", as they often do, but as soon as I  started to lean into a turn, I immediately knew something else was wrong. Not only were my handlebars vibrating violently enough to make my GPS illegible, but my steering was also all over the place. As I took the nearest exit I could, about half an hour from my grandfather's house, I nearly jackknifed my handlebars in order to move in a straight-ish line. Something was very wrong, but with my limited knowledge, I had no idea what.

As I sat in the Dunkin' Donuts parking lot dumbfounded, I inspected nearly every piece of that motorcycle, until realizing something about the back wheel just looked a little funny. After giving it a light kick, the tire moved halfway across the wheel, as if there was nothing mating the two at all. Knowing I was in over my head, I called triple A, and patiently waited as the sun set and left me alone in the parking lot in an unknown town. I had no one with the capability of picking me up, and in the time I waited for the tow truck, even that Dunkin' closed, leaving me with a cold coffee and a street lamp as my only entertainment for four hours.

It was in the tow truck ride back to my grandfather's that I began googling motorcycle education courses in Chattanooga and determined that I never wanted to be in this situation again. It was three months after that night that I started school, and I haven't looked back since.

Oh and that tire issue? Word to the wise, inflate your tires when you trailer a bike 1300 miles from a climate that's 80 degrees to a climate that's 50 degrees, with snow coming the week after your bike is delivered. Or don't, and you'll be like I was, desperately googling "tire bead replacement part" in that same parking lot.

Where I Am Today

Today, I'm sitting at my desk after fixing a check engine light and learning more about outboard motor wiring diagrams at school. Every week I walk through those doors and learn new concepts, ways of doing things, or in some other way manage to get my hands dirty and involved. As always, I feel this is best expressed in photos, so below I'll show you a few scenes from my time at trade school: 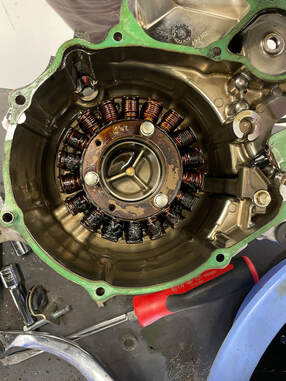 Above this is my first photo from trade-school, it's a gummed-up stator I removed off a Honda VT1100 that was having issues charging its battery. So, as a total green thumb, my job was to scrape the green gasket material off of the crankcase and replace the stator with a more experienced student over my shoulder. Looking back, I can't believe how long it took me to get that done, but, I also can't tell you how great that feeling of accomplishment was when that bike fired up, and its battery was charging without issue. I will never forget that first attempt and success. 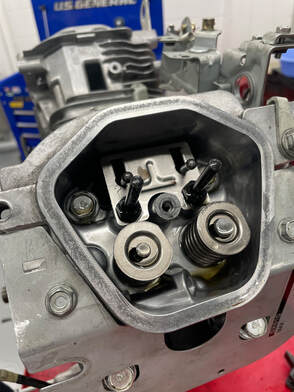 As for this photo, this was my first example of precision measurement tools, like micrometers, feeler gauges, and vernier calipers. As a class project, I and a classmate disassembled and inspected each and every part of a Honda GX10 engine, and better yet, put it back together and ran it. I couldn't tell you why I took a picture of those valves, but I did, and still think it looks pretty cool. 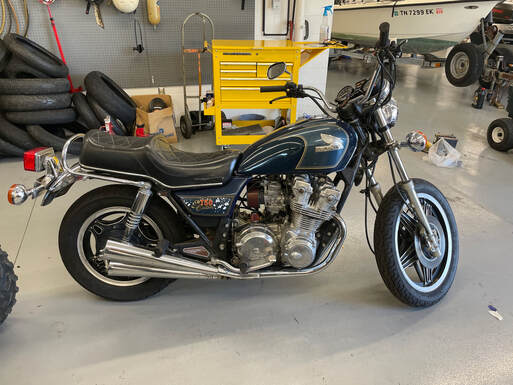 With my confidence growing a little faster than it should have, I did what any Thompson would, and bought another motorcycle. A gorgeous, 1981 Honda CB750c, which was one of two identical bikes I purchased that semester, each with their own mechanical hiccups I was sure I could fix for a profit. As it turns out, parts are not cheap for a 41-year-old motorcycle with a one-year run on its front brake caliper setup, and a starter clutch hard to find in good condition. This photo was taken as I sold it for a loss to a classmate who wasn't as deep into it as I was. I'd like to think I learned my lesson from this one, but couldn't tell you for sure.
This last set of photos started last week and finished just this morning. Armed with confidence and a little forum reading on a car issue I was having, I tackled my own maintenance on my day off and came back to school for help when the valve I replaced wasn't the problem. The solution, assisted by my teacher and a code scanner, was another valve in that same system, which after ten minutes of work, fixed my car troubles and took some much need frustration out of my days off, but what's more important to me is how that solution came to be.

Instead of going to school and asking everyone around me question after question about everything from what defines an air-cooled engine, to vehicle-specific systems I was simply curious about, I was in a place where I felt confident enough to fix something on my own, armed with information I found myself, and with parts I ordered without consulting another soul. Was I right, and did it fix my problem? No, not really, but what's important was that I wasn't far off, and I wasn't guessing blindly anymore.

I attribute that confidence to my time at trade school, and can't wait to see what another eight months can do.
Thank you to all of you who continue to support me and read through these articles, even when they change topics and locations on a whim. I look forward to the next one! Wherever and whenever it may be.